Spotlight on WMSCOG at high-level conference in UN 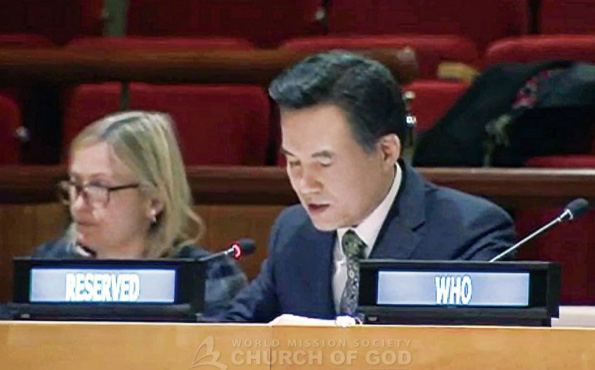 Kim Joo-Cheol, the General Pastor of World Misson Society Church of God(WMSCOG) was in the spotlight with  giving a statement at the UN headquarters last Dec.13, at the 71 st United Nation General Assembly.

The conference was under the chairmanship of Mr. Stephen O’Brien , Emergency Relief Coordinator (OCHA).

While, Mr. Ban Ki-Moon ,the Secretary-General, delivered the keynote speech. The Foreign Minister of Uganda, Sam Kutesa, the Minister for Development Coop. of Denmark, Mr Ulatonas, Filippo Grandi, the High Commissioner of the UN Refuse Agency, Ms.Rosa Malongo, the UN Resident Coordinator,  all presented at the conference to debate for a better future.

Why did Church of God Join this Conference?

“The Church of God believes in God the Father and Mother in the Bible and marks the New Covenant made by Jesus Christ. The church also has responded to various relief efforts around the globe through environmental clean-up, food aid and emergency disaster responses. All these came from a heart of a mother.” says, pastor Kim at the CERF conference.

The Church of God espoused CERF and other UN Organizations ,promised that they would be working together to sustain, nurture and sympathize to the world using a heart of a mother.

Just like the ‘Good Samaritan‘ from the Bible , the people of the Church of God will have their hands fully by this year in order to support 7 billion others, with the help of God the Father and Mother.

About Church of God

The Church of God started in S.Korea in 1964.  Currently it has  2,500 local churches in over 175 nations. They all believe in God the Father & Mother including the values and teaching of the Bible.

The Church of God keeps the Sabbath, Passover and God’s Commandments sacred and also shares neighborly love through variety of community services such as, clean-up campaigns, livelihood and blood donations as well as voluntary services. So they won “The President’s Volunteer Service Award” from Obama.