MY HEAVENLY FAMILY – HEAVENLY MOTHER, FATHER AND US

The word ‘father’ was quite unfamiliar to me since my dad passed away when I was young. I went to church on Sundays finding ‘father’. Fortunately I came to know that God is my heavenly Father and I am His child – ‘I have a Father in heaven!’ Then I felt that I am happy. But as time goes, a question arose in my mind. Generally, family is consist of father, mother and children. Then heavenly Father and His children exist. How about heavenly Mother? Isn’t it natural that there should be heavenly Mother as well as heavenly Father? Words “father” and “mother” go together.

So I asked to my pastor, “Since God is our heavenly Parent. For heavenly Father exists, is there heavenly Mother as well?” He laughed at me and said that there exists only heavenly Father. So I didn’t ask him any more. 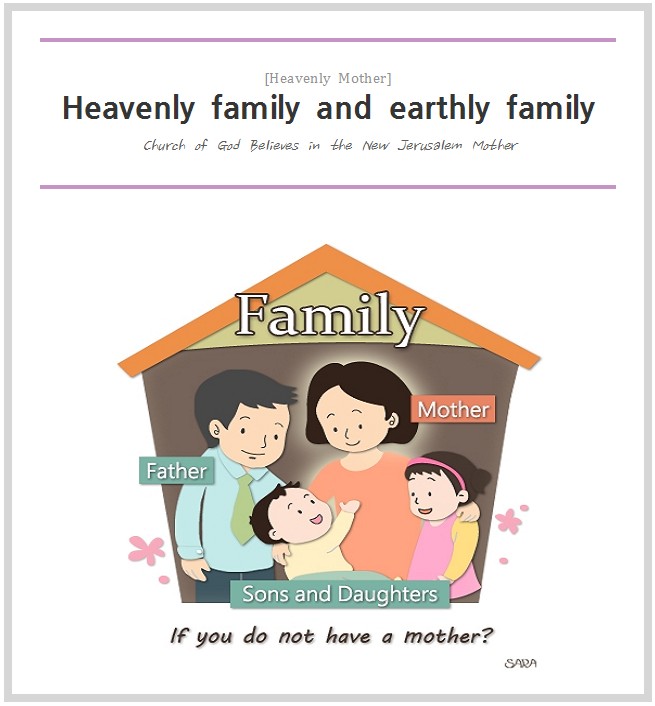 About Family – We all have Father, Mother, siblings

Yes, I found Heavenly Mother – All of My Heavenly Family.

Several years passed by, and I met a nice and neat partner. She was kind and helpful to others, including me. One day when she finished her work early, I saw a paper written “Teachings of Mother” in her Bible. “Teachings of Mother?” ‘Bible and Mother’ were unfamiliar to me. And this paper reminded me of my past question to the pastor. Then I carefully asked her about the paper and the same question that I asked the pastor before. She answered me an unexpected answer. She told me that there exists heavenly Mother as well as heavenly Father in the Bible. So, she believes in Her and she tried to put “Teachings of Mother” into practice. She showed me heavenly Mother through the Bible. I was really shocked!

Mt 6:9 This, then, is how you should pray : “Our Father in heaven, hallowed be your name”

Ga 4:26 But the Jerusalem that is above is free, and she is our mother.

I was really surprised at the fact that there are heavenly Father, heavenly Mother and children in heavenly family through the Bible. I came to know my previous question about Mother was not shameful but very natural. Just as I had missed my father since I couldn’t meet him when I was young, my soul has also missed heavenly Mother. I burst into tears that I found my family.

I really give glory and thanks to God the Father and God the Mother who let me know this. Mother! I love You~!